Our Most Popular Apple: The Honey Crisp!

As soon as apple picking season begins we start getting asked about the Honey Crisp apple and when it will be ready. And this is for good reason! The Honey Crisp apple variety is large, sweet, juicy, and has an explosive crispness that makes it a one of a kind apple! It’s ideal for eating and also great for baking, making any apple recipe that much more delicious. 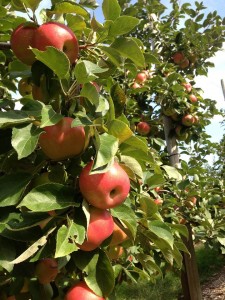 The Honey Crisp apple was first produced as part of an apple breeding program at the University of Minnesota in 1960. It’s a cross between a Macoun, which is an excellent, high quality McIntosh-style apple developed in New York that is extra sweet and juicy with a hint of crunch, and a Honeygold, which is a cross between a Golden Delicious and a Haralson with a sweet flavor.

Honey Crisp apples are available at Parlee Farms until late September. Details for picking Honey Crisp and our other 20+ varieties can be found at ‘Today’s Farm News’: https://parleefarms.com/farm-news/. You don’t want to miss out on these delicious apples!