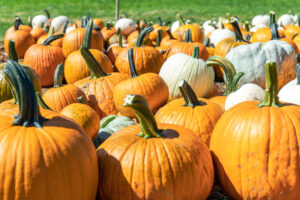 The Irish people are given the credit for inventing the tradition of decorating pumpkins. As legend has it, a man named Stingy Jack played a trick on the devil in order to make money. This trick had repercussion because when Jack died, not only did he not obtain entrance to Heaven, but the Devil wouldn’t let him into Hell, either. Instead, he was sentenced to wander the Earth for eternity.

The tradition of carving scary faces into vegetables began with this story. The goal was to carve images that were scary enough to scare Stingy Jack away. The Irish began carving the faces into turnips, and eventually the tradition continued with pumpkins.

Eventually, the tradition of carving scary faces into pumpkins continued through Samhain, which took place on November 1st and was a celebration that occurred in Britain and Ireland that marked the end of summer. Back then, people believed that the souls of people who died in the previous year would wander the earth. Wanting to feel proactive, people started carving faces in pumpkins and other cold-weather vegetables to keep the souls away.

When Irish immigrants came to the United States, they also brought their traditions with them, which involved dressing in disguises and pulling pranks. Trick-or-treating for candy eventually evolved from this. Both the British colonists and Irish immigrants also carved pumpkins as part of this time of year, and eventually the tradition spread to others in the United States. Now, the carved pumpkin is a universal decoration to represent Halloween and the fall season in general.

October is Pumpkin Season at Parlee Farms. To learn more about pumpkins, consider visiting one of our other articles: